The Seven Hues and Shades of The Devil

Historically, there is a concept that pervades every spiritual / metaphysical teaching. That is: the enemy within, The Devil in Tarot; in traditional astrology, it is house 12, the house of self-inflicted harm, or self-undoing.

I find the term “self-undoing” particularly accurate; it synthesizes its essence so well: “what our normal, sane essential nature does, house 12 undoes”. When The Devil is active it is like driving with the hand brakes on — we move along but something feels stuck and not quite right. It is the “splinter in the mind” that Morpheus in the movie The Matrix alludes to. 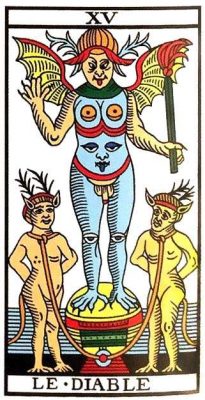 The forms of manifestation that this “undoing” process takes are numerous. However, they are, like everything else, based on seven building blocks or energies. Yet, what makes these energies “undo” the best we have is one particular psychic phenomenon, that is: fear.

There are seven types of basic fears around which all distorted traits of personality revolve. Each of us, with rare exceptions, has one main fear that we learned to repeat since childhood and thus have formed a network of psycho-physical habits that brings us an endless stream of unnecessary suffering.

The Devil correlates with the concept of Chief Feature in the “Michael Teachings”.

Find below examples of how The Devil manifests in people’s lives according to my observation of the seven basic patterns of psychological self-undoing and according to how it is outlined in the Michael Teachings. This knowledge in the hands of a sincere observer and active and properly developed Hermit(the initiator of spiritual work) provides the tools needed for expansion of consciousness of psychological phenomena and neutralization of such fears. That is spiritual/energetic work to clear the psyche of corrupted energies.

The Seven Psychological Chief Features and their core Fears

Active Devil: resists/rejects restraint/tranquility. Fears lack of control. Feels helpless. Engages in dangerous, extreme or excessive activities to elicit “control” from oneself. Pushes to limits. The heart longs for peace and tranquility.

An effective Hermit addresses issues pertaining to compassion/tolerance to self and others.

Active Devil: resists/rejects discrimination/decision. Fears missing out. Feels oppressed by time and lack thereof. Crams as much activity as possible within any available time. Gets stressed out by a never-ending lack of time.

Active Devil: resists/rejects resilience/engagement
Feels overwhelmed. Avoids engagement with life and when it engages seeks to be abused or to fail to deliver on the requirements of the context. We feel we are a victim of people and circumstances. The heart longs for resilience/engagement.

Active Devil: fear and resistance to change/movement pervade the psyche. We feel powerful when we say “no”.  We find reasons not do do things. Resistance agains external pressure from people or events.

Notice that chief features occur in pairs with one being single. People with one of the chief features will often slide to the opposite feature when the chief feature is challenged. For example: the arrogant feels ashamed of worthless when disliked by people, that is, slides into self-deprecation. The impatient feels like a victim when there is not enough time to do all the things he/she wants to do. That is, slides into martyrdom. Etc. Stubborness can slide into any feature and vice-versa.

You may find more detailed information in this book.​

The Devil and the Judgement
Thoughts on Temperance