The Lover or the Lovers?

This article is based on a discussion with a fellow Tarot reader about Jung’s idea of archetypes. The question arose about the meaning of “the Lovers” and its meaning being “a sacramental blessing of a transformation forged in love”.

First of all, the meanings of any card can change from one moment to the next, from person to person, from reading to reading, from context to context. My context here is the “spiritual path”.

The meanings of the archetypes for Jung made sense for him based on his understanding. As Waite’s meanings did for him. My understanding of Tarot is almost entirely based on my own observations of patterns in people’s lives, including my own, and matching them to the symbols; with some help from Alejandro Jodorovsky and Yoav Ben-Dov, who also have their own understanding of the spiritual path and the archetypes.

I chose not to follow Waite early in my studies. Being a long-time Traditional Astrologer (as opposed to a modern astrologer) as well as a former student of the Fourth Way System taught me that the esotericists of the 19th and early 20th centuries were very eager and prone to making arbitrary modifications to ancient knowledge systems. That does not appeal to me.

As for the meanings of individual cards, we also have to be true to our framework of choice.

In Waite’s Tarot it is “the Lovers” – plural. In Marseilles’ there are not two lovers. It is one male (active) choosing between two women (passive) with some force from above compelling him to act one way or another. It is “the Lover” – singular. It is a “male” archetype. Those factors are very significant in the meaning of this archetype and guide the mind in a particular way. Nobody is looking at the angel in the card. They are not even aware it is there to begin with. The angel is not old and grand, he is like a child and is inexperienced. There is nothing inherent here pointing at a blessed happy union of lovers with an archangel looking over them.

So, we have two very different symbols and thus the essential meaning of the archetypes are different. 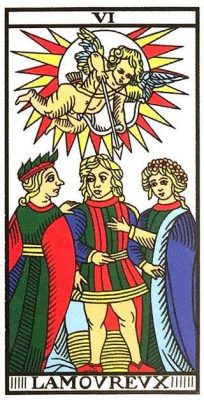 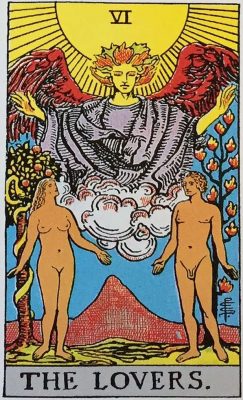 The meaning of “a sacramental blessing of a transformation forged in love” for “the Lovers” seems acceptable as a description of Waite’s image to me.

In my approach of Marseilles, “the Lover” represents the arising of choice in emotional relations. That is the most fundamental and essential concept. It has nothing positive or negative about it in essence. It depicts a fact and a discernible major pattern in the life of the soul.

Love is certainly where it all starts, after all, we choose what we like and decline what we do not like. Where it goes from there is the rest of the story. It could be a story of a family full of love and care or it could end in murder or anything in between. All based on one or a series of emotional choices and stemming from one initial choice, which the card points at.

Considering that the context of my writings is “spiritual development” or “the spiritual path”, I must take into account both the potential for blessings as well as for transgressions in The Lover. And it is the transgression of love that is the seed of negative karma. Conversely, it is love and care that create positive karma.

The only reason we incarnate to pay karma is that we feel we owe it to somebody else whose “sacramental blessing” we betrayed in the past. Karma is rooted in emotion (that is why the Wheel of Fortune is in water in Marseilles). The card in the major arcana that describes where the karmic process begins is The Lover. So, if we want an accurate picture of the spiritual path we have to ascribe it where it belongs. Certainly, we should not just arbitrarily leave it out as if the pattern did not exist or were not important at all.

When I mention karma when speaking of The Lover I am attempting to mention the “dependencies” to other cards along the path. I am not saying that the fundamental meaning of The Lover is “karma”, or that its meaning is negative. On the contrary, I am saying that it has two sides to it, as the card itself shows it, with one woman being chosen over the other, or doubt between them and hesitation (look at his feet pointing in opposite directions).

Having said that, we could easily associate the seed of karma with the apple tree and the snake story in Waite’s card, but without the details and subtleties pointed at by Marseilles. So, the seed of trouble is there even in Waite’s modified card.

Plus, they are heavily clothed for a reason in Marseilles. This archetype has nothing to do with being naked and what such symbolism implies. It is too early on the path to be naked. Much has to happen before we can shed our façades and be that free and that is shown rather later in the Major Arcana series in The Star.

But somehow, in Waite’s mind that is not the case which, to me, shows Waite’s understanding of the causes and the effects on the spiritual path was somewhat idealized – we cannot reap the benefits of spiritual development before its season comes. Much spiritual work must be done before we can be naked without freaking out.

Or, maybe Waite simply did not consider symbolism deeply enough. Or, like Crowley, and much of his repressed Victorian culture, he was fascinated with sex and could not resist having a naked couple at the first opportunity in Tarot. Really, god only knows what went through his mind when he changed that card…

Waite tells one story about the spiritual path. Marseilles tells a different story. And even within Marseilles itself different authors simply leave things in or out based on their understanding.

I make the association of this card with karma, based on my understanding of the path. I may or may not take that into consideration in a reading. Here I am simply displaying a map of the spiritual landscape as I see it and I offer it for consideration.

Also, as I usually mention when discussing such discrepancies between decks, for the purpose of most readings it makes little or no difference which deck to use. We can answer questions with whatever cards we choose, even regular playing cards, or Tarot with cats or frogs instead of people.

But to describe the archetypes on the spiritual path Marseilles offers the only option congruent with my experience.