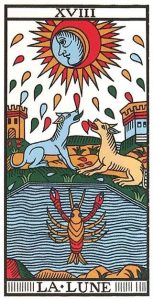 But alas, there may be still disturbing forces at play. These forces come from traumatic experiences in the past. The energy bleeds into the present experience via our emotions: The Moon.

The intellect may well have a clear picture of a life that is independent of previous lives, or it may even exclude the notion of multiple incarnations completely. It does not matter; the energy from those memories (held in that book in the High Priestess’ hands.) comes through the Moon and ends up being expressed whether we like it, or accept it, or not. Likewise, unresolved unconscious traumas early in this lifetime impinge upon the present experience bringing that pain back and generating new pain.

The two animals, like every card in this series, describe the presence of duality and the pendulum between the opposites within manifested existence. Furthermore, it is emphasized here that each opposite contains the seed of its opposite, shown by the shared colors between the animals; like the Eastern Yin-Yang symbol. The emphasis however here is on emotions.

These unseen energies coming from this unconscious painful past are shown by the crayfish offering two little blue “balls of emotional memory” to the two animals, past the straight lines of the intellect which border the pool, feeding the memories into the person’s life and propelling the person’s duality pendulum. The Moon’s face on the arcanum is one of hardship and acceptance: consciously processed pain leads to wisdom and peace.

Here (in contrast with The Devil) emotions are shown in the foreground as water. This arcanum shows the unconscious emotional side of duality (as the Devil emphasized the intellectual and instinctive) and the necessity of bringing it all into the light of consciousness for processing.

In the image, we see the Moon and the Sun behind it. It is the image of an eclipse. That is if there are unacknowledged and undigested hurtful emotions lurking they will inevitably obscure our peace and the light that never stops shining behind it, in our very core.

Light is needed to illuminate the dark corners where these emotions arise from. That light often expands our consciousness into a temporarily vulnerable place; it can be painful. Facing fear is the price for the reward of fearlessness. We need the Sun.