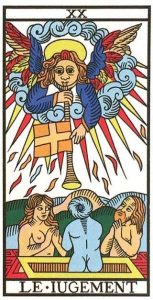 From a spiritual path point of view, the Judgement can represent the moment the sense of separate self is removed and the True Self is revealed or “remembered”. The Self calls and the call is heard.

The blue figure represents a “spiritualized ego” rising from a tomb. This ego does not claim to be separate from the Self, neither does it claim to be one with the Self. It makes no self-related claims whatsoever. Psyche and Self are Realized as Not-Two. This realization is not a mental stance.

Some authors call this arcanum an “awakening”. I think it can be but I prefer to differentiate it from the “awakening” shown by The Hangedman, in the sense that it is an “induced” awakening. It is a conscious “return” to what we are. This is not a “surprise awakening” or revelation, as was the case with The Hangedman. (Although it can perfectly represent a revelation depending on the reading). With the Judgement, the mind is already primed in the truth that All Is Consciousness and the factual absence of separation between self and the world. Death has already been doing an effective job of removing false beliefs and misperceptions.

In the Judgement the obvious is already “known” and reaches deeply into our sense of self. We simply “return” to Self-Knowledge. I or the world are not upside-down like in the Hangedman. The World is what it is, I am What I Am. In The Judgement we are being told by an angel playing a horn in our faces: “go back to what you already know You Are. There is nothing else to seek or place for doubt; This is It; Now”.

The gist of this arcanum is that there is a prompting to look within and find the source of the psyche. The prompting can come from the Sun (a teacher for example) for some time. Eventually, it becomes spontaneous and effortless — from the Sun Within.

This arcanum points at the ultimate moment of discrimination when the Self is (for lack of proper words to describe) known in its True Nature. The persistent and most subtle false notion of “me as an author of experience separate from the universe”, and all the restlessness and suffering that that implies, is absent in the realization of the True Self.

In essence, this is the same realization present in the Hangedman. However, then it was a total surprise; we were caught off guard. We had been serious spiritual workers but we had no clue about what we were working for. We were working to save the ego from death, no matter how well disguised the intent was. We had been sincerely working in ignorance and in the dark.

The Hangedman’s surprise was of knowing that we are not what we thought we were, therefore, the immortality we were seeking was imaginary; the surprise of knowing that immortality is irrelevant altogether. Aptly, our spiritual view of the world and ourselves were turned upside-down. Immortality can be relevant only to the ego/time-identified consciousness. The True Self (The World) is timeless; it was never born; death does not apply.

Here, in The Judgement, after the Self has “pierced the psyche” (The Hangedman) and after a period of cleansing (Death) under the light of consciousness (Sun) the psyche has been purified enough of suffering, degrees of ignorance and doubt in order to allow it to align itself with Truth and “move” in the direction of Truth without any hindrances (rather than moving in circles within itself).

In the Fourth Way terminology, this arcanum represents the triad of Self-remembering.

From Strength through The Judgement we may cycle numerous times. Sometimes linearly, most often multi-directionally and simultaneously hopping from one state or pattern to another. These arcana represent the major factors in the conscious spiritual development towards Spiritual Realization.