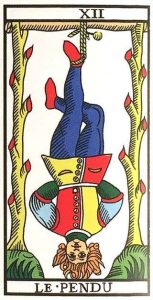 revelation of the true self

Oh! Mountains are not mountains! Rivers are not rivers! Valleys are not valleys!

From the perspective of Self-Knowledge, and Self-Knowledge being the goal of the spiritual path, The Hangedman has one significant meaning: it represents the understanding of our “non-authorship”. It is the realization that the ego as a creator of experience is non-existent. The mover of the universe is not personal, never was and never will be. The person as sole author of experience is a figment of imagination.

Along that line, the Hangedman embodies the understanding expressed in the Christian tradition as: “Thy Will be Done”. There is no individual personal will, in reality; there is only God’s will. And there is no separation between Self and God. That is the insight.

How is that depicted on the Tarot card?

He is suspended supported by wands growing from the ground. Wands is the symbol of action, which shows that the acting power is not his. Any action that he performs in life is 100% dependent on a power broader than the individual. Well, he is hanging by his foot! How much can he decide and choose without outside help?

In the words of the Buddha: “Deeds are done but there is no doer thereof”. That is understood in the Hangedman.

The remarkable symbolism goes further. That realization is a major change in perspective in our view of life, ourselves, and spirituality, symbolized by him being upside-down.

Near the point where the Hangedman is tied to the top beam, we see an open circle with three lines in it. That represents the three fundamental facets of our True Nature: love, truth, and beauty, which the Hangedman has now had a deep taste of. The True Self is now known.

He is now hooked; from now on he wants to go back to that peace. The Hangedman has now perceived his union with God, more specifically, he has realized that God and Him are not two, or separate. Every knowledge, belief, or mystery pale next to what the Hangedman Knows.

The small open circle in the image is incomplete however: this is only an insight into the unity and the fundamental trinity of the manifestation, it is not a living reality for the Hangedman. The psyche and its habits of unresolved ignorance and pain close the doors to this most sublime realization. A new approach must be taken. The circle will be completed later, at the end of the process of elimination, in The World.

The symbol of “love, truth, and beauty” is found in various of these arcana (three dots, for example) indicating the presence of those three qualities in some of our experiences and states, as we shall see.

The Hangedman is the archetype describing the first time the realization of our True Self takes place in sufficient depth to cause a lasting impact on the psyche. It is the first true moment of Enlightenment or Awakening. This event will have ongoing repercussions in the spiritual seeker’s life. It opens a crack of light in the mind which has the potential to never be shut again…