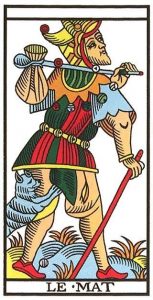 The archetype of the soul who chooses to experience lifetimes on the physical plane. It is the metaphysical aspect of Being. Throughout this site, I refer to it as “soul”.

The soul lives through time and learns and grows traversing numerous incarnations.

The text below is based on information channeled from the entity “Michael” (not the archangel, a different Michael). The text itself is not channeled. This is my personal interpretation and how I connect the dots.

INFANT SOUL
In the early stages and early incarnations, it will focus on survival on the physical plane. The Magician is the central arcanum in this soul age. It has to create the basics and the basis for life.

BABY SOUL
Focus on structures such as family, family lines, clans, and the security of groups including closed and/or tightly regulated religious groups. After learning about survival in the infant stage the soul now wants to retain security. The main arcana are The Empress, The Emperor, and The Pope.

YOUNG SOUL
Now that it feels secure the focus is on the individual and individual exploration and accomplishment. “I am the center of the universe”. “Me” is the most important thing here, often at the expense of all else and all others. Wars are a tool of self-expression. The main arcanum is The Emperor and The Chariot.

MATURE SOUL
“Me” has been fully explored in the young soul age. Now the arcanum The Lover kicks in and the focus is on the relationships between individuals. Emotion and empathy are developed. “We” is more important than only “me”. “You are like me, I am like you”. Social maturity and human rights belong to this soul age. While creating and paying karma goes on since the beginning, here it becomes more and more emphasized so The Hermit becomes more active.

OLD SOUL
The focus is on “being”, and the well-being of the whole. We and I and the whole are all One living organism. Wars become uninteresting and undesirable by any measure. Unconditional love and Being is what matters in this soul age. Those reading this are likely to be old souls, or late mature, at the earliest.

Spiritually speaking, younger souls mostly have no interest in the Hermit or on any of the following arcana. Their focus is almost fully on the physical plane which is represented by arcana one through ten — the Worldly Path. Spirituality is unconscious and when conscious it is projected as a divinity “outside” in the form of a mental object called God who allegedly is out there to make me happy or punish me.

The Hermit is an archetype that souls access more and more as the soul ages, it acts as a transition from consciousness focussed outward to inward; from the physical to the psychological. So late Mature Souls and Old Souls focus from the Hermit all the way to The Judgement; thus “from Strength to The World” I call the “Conscious Path”.

After a large number of lifetimes lived old souls have experience with and have activated all arcana. However, in lifetimes when the goal is of a spiritual nature arcana eleven through twenty are the most active.

Arcana eleven through twenty concern the psychological aspects of the mind with respect to spirituality. With arcanum twenty-one representing that which is neither physical nor psychological, nor metaphysical, but the Essence of Being.