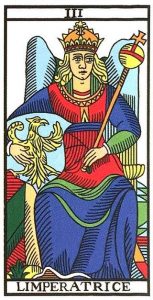 Now that the incarnation game is on, after creation and accumulation, expansion is needed to produce bodies for souls to incarnate in. We need a couple to procreate so we have the Empress and The Emperor next.

The Empress and The Emperor are simple but profound archetypes and mean much more than what we carry in between our legs.

They depict the two fundamental opposites to be found in duality manifesting in countless forms physically, emotionally, and mentally.

They represent modes of energy. Yin and Yang, passive and active, asserting and receptive, pleasure and pain, water and fire, female and male…

From a spiritual standpoint. The empress is the female archetype.

In its most basic and instinctive manifestation, it fulfills half of the reproductive function. Notice her scepter touching her genitals and the little green leaf sprouting from its base. We will see that same scepter in the Emperor’s hand while facing the Empress.

As the soul grows from being an animal into being a full human we come to embody the Empress in all that the female energy entails: receptivity, emotionality, adaptability, yin, softness, care, love, acceptance, humility, motherhood; as well as the distortions of all those qualities when manifesting in their negative forms.

Being incarnate in a male or female body is only one factor in the exploration of these two opposite energies and while in many cases the biology supports the energy, in many cases it does not.

Female energy manifests in a male body and vice versa, in varying degrees and forms.