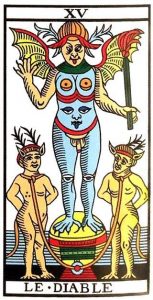 The Devil is the archetype of self-inflicted suffering, ignorance and attachment. It represents a modus operandi of the human mind.

The devil is never hidden, shown by the torch it carries; it is permanently illuminated. What perpetuates the suffering is the unconscious and/or simply habitual approval of those bound to the devil. The people are not fighting the devil, they are passively subject to the ties with their hands behind their bodies.

The Devil represents mind activity, negative emotions and attachment that supports psychological suffering. In the 4th Way terminology it is False Personality. At the root of its manifestation, is the belief that we are a vulnerable self that must be protected at all costs. Its root is fear. In this mode of operation, we are ignorant of our true Self. From that perspective, in terms of what to do about this predicament, the only final antidote to the Devil’s grip is The Judgement — pay attention to the True Self.

The devil holds people by leashes around their necks and the people have tails, that is, self-identification to the body is perpetuated.

The devil has horns and the people have horns, emphasizing the intellect and the resonance among them, like antennas sharing the same signal.

The devil displays two tongues: one on the head (intellect) and one on the belly (instinct), and the people display large ears. Traditionally the Devil “speaks” to us, that is, it uses language, intellect, and we are sure to hear it when it speaks.

The Devil stands on a pedestal rooted in darkness representing the unconscious, as do the people who listen to him, by clawing to the black patch on the ground.

The male/active person is looking attentively at the devil’s sex organ; the female/receptive is staring into the air, one representing an interest in and the other resigning to the Devil. While the emphasis here is on self-inflicted suffering the root of such a state is to be found in ignorance.

Ignorance of the nature of the psyche and its workings; thus the need to study and understand the psyche. Ultimately, it is ignorance of our true Self.